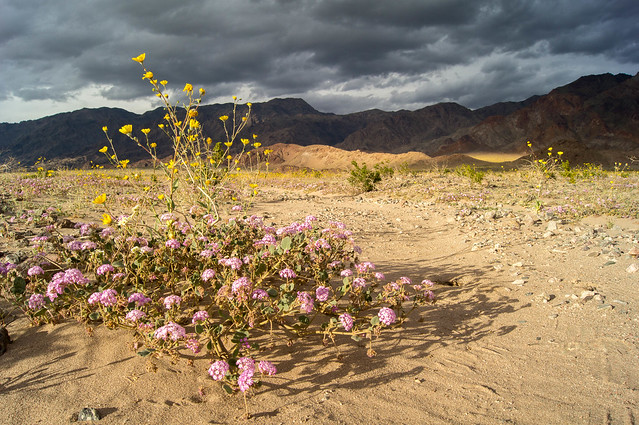 Other "bad" news: so many photos to edit, and none of them do the incredible scale of the valley and the bloom justice.

We had miraculous timing as one day later we would have been witness to the windstorm: "A vicious windstorm tore through the valley over the weekend, and devastated many of the lower elevation flowers. The Badwater Road is only a shadow of its former glory, and the fields along Highway 190 were hit hard, also." We were in the park Sunday morning and watched the wind whip around and stir up dust devils. And as we were driving south at the eastern base of the Sierras a cross wind was whipping around at 25 mph: more dust storms to watch and drive through.

My friend had been to Death Valley six times before and loves the place: she was even more awed than I.

We found a surreal plant: https://www.inaturalist.org/observations/2756390 It's just a hand's length high.

My manager and my director were in our office this week. I discussed the move with each of them and got very supportive responses. So, Yay, we look for a house with the assumption of an ongoing salary!

Been very busy: meeting churn. Our clerk is, i think, feeling a little betrayed by my planned departure.

Also, a colleague is retiring and i spent hours pulling together a little booklet as part of his good bye. (His good bye, in turn, leads me to have a bit of blues: just a little loss.)

This is also posted at http://elainegrey.dreamwidth.org/597990.html .
Collapse