More pica cuteness (plus other critters visiting the pica's haypile). 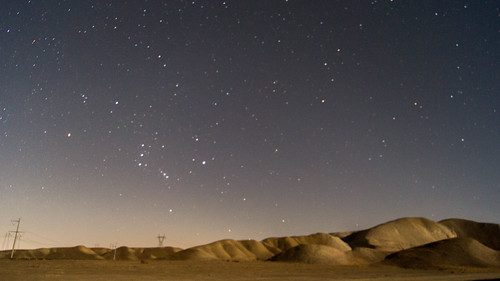 Wednesday night we drove down to Panoche Hills and set up to watch the meteor shower. We might have seen more had we started at 2 am instead of stopping then, but there was something wonderful about watching the quality of the darkness change as the moon set behind the mountains. We saw a number of meteors but they didn't all seem to have a strong relationship to the Orion radiant.

The next day we drove around a bit, testing routes on the old USGS maps and Google Maps. There are some places we might have been able to go had we had a high clearance vehicle that would be able to get itself unstuck, but instead we drove down a road to return and find the gate locked. Ooops. Fortunately, i found another route out. Whee!

That exit route took us by a campsite with RVs and dirtbikes and a tall flagpole topped with an American flag. I have various snarky and irritated thoughts about why one might fly a flag at ones campsite, but then i recall learning to raise and lower the flag with respect at girl scout camp. My grandfather also made a practice of having the flag up. Perhaps it's simply tradition.

I never did find a route to the area i wanted to visit.

We had some nice chats with the BLM recreational manager. First, he chatted with Christine while we were poking about in the back of beyond. There was a remarkable amount of traffic on these BLM roads, apparently for pipeline work. Once we were trapped, we asked a bridge inspector if he had a key, but he did not. He let the BLM guy know, so we chatted with the BLM guy when we saw him by the gate as we returned on the other side of it. Then he was headed for the same day use area we were, and we had more chat there.

Only one person playing with their guns: no quail and feral chukar hunters about. The BLM fellow was going to go let the target shooter know that he was too close to the day use area, perhaps inspired by how Christine and i jumped when the gun shot echoed off all the hills.

I was quite pleased with my topo map app on the iPad, and have identified some external GPS so I don't have to estimate where we are. As i told Christine, though, the area is so rugged that it is easy to determine where one is due to the contours.

I can't wait for it to green up down there.

The hotel we stayed in was pleasant enough, although the water at the hotel and in the fast food place was not. The only campground with facilities is $35-$40 per person per night. (Admittedly, that includes the tubs at the hot springs. Which is "mineral water." Which is probably not dissimilar to the hotel water.)

Home seemed green and lush, which is an indicator of just how incredibly dry the hills were. I found a skeleton of a fiddleneck plant that just crumbled to dust when i reached out and touched it.

Planning my next trip -- but really i should be writing their botanist to ask about field work with him this spring.

This is also posted at http://elainegrey.dreamwidth.org/582291.html .
Collapse