We left early this morning to see the locally rare flatfaced calico flower or flatfaced downingia this morning. It's a flower that grows after vernal pools -- water left standing from our rainy season -- dry up. Someone had observed them in a vacant lot, so we followed.

Camera: 8% battery and no image card. 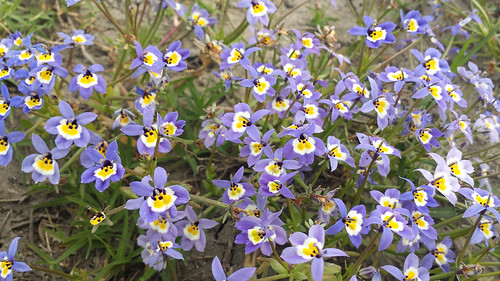 Ah well, the phone is fine. I noticed, mixed in with the downingia, a somewhat scrubby DYC. It resembled a few things i knew to be weeds ... but not quite. I pulled some up to take home to identify.

HOURS later i have every diagnostic documented, but still no ID. 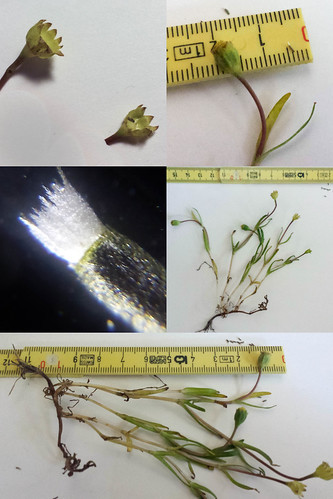 So, i decided this would be my very first botanical collected specimen. I've pressed this one and the second one i collected. What if it was something special? It's a native, at least, as someone on iNaturalist commented, "tricksy rayless lasthenia!"

I also spent another forever with another plant that looked kinda weedy. I ended up looking at all 200+ plants that were perennial wildflowers known growing in wetland areas of the three south bay counties. I found it: Lythrum hyssopifolia. (Limited invasive species.)

The last two flowers i noted on our outing i've decided can stay at genus level identifications.

(Meeting work is, as usual, outstanding.)

This is also posted at http://elainegrey.dreamwidth.org/559808.html .
Collapse