Resting up in the heat. On Friday, i started work with a problem at 7 am, so in midafternoon i stopped work. We took a drive over the hills/mountains to the ocean: altitude didn't seem to help, which was a bit unusual. When we arrived at highway 1, the fog bank was lapping inland. I stopped at a place with coastal access, put on my jacket, and walked out to the bluffs. It's almost as if the fog bank receded ahead of me, and i had to take the jacket off and felt overly warm as i returned to the car. We were closer to Half Moon Bay than i thought we were, so I tried to kill a bit of time by going into a yarn store. It was closed, but the book store was not. I then worked a little, monitoring an install at 6 pm (9 pm eastern time), in a Starbucks. 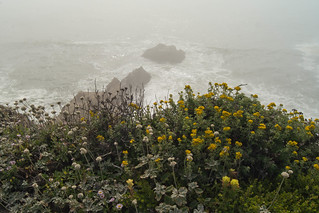 We went for dinner in a restaurant we like, but on Friday evening it was loud beyond hearing. I was facing a window, and so the glare behind Christine made hard to track her facial expressions. With my senses of sight and sound over-saturated with input, my sense of taste seemed heightened. I had fresh local halibut, and it was incredible, sweet and tender. I was aware of the recent life, the critter whose life was taken, and felt a little humbled.

Yesterday was rather low key as i processed my photos from the day before. I had a lower mood, with some of my sense of being down related to being critical of my photography, but, as Christine pointed out, i was probably just tired. (And probably still am.)

In the heat of the day we went to our local hardware store and spent money. We now have a fan to replace one that died some time back, giving us a fan in the window for each room again. (Necessary for pumping in the cool night air.) We invested in our THIRD set of outdoor blinds. This has a three year warrantee, so hopefully they will last and continue to function. With the western exposure for the living areas, blocking out the afternoon sun is critical, and creating shady air pocket between the living area's windows and the sun is more effective than simply closing the inner blinds.

I also bought more bird seed. I really spend a great deal on feeding birds. I wonder if we should just stop using the bigger feeder, which attracts the house finches, and just have the suet for the chickadees and the thistle for the gold finches.

This is also posted at http://elainegrey.dreamwidth.org/457324.html .
Collapse