Last work week was intense with some crises, post mortems from the previous week's crises, and general intensity as i scrambled to prepare for the weekend trip to the LGBTQ gathering of Friends.

The flight on Virgin America was pleasant: hours of crochet and audio book. Our drive from PHL to the Poconos was longer than i had accounted for, given holiday exodus traffic, but i was happy behind the wheel. The gathering was wonderful -- and i don't know how i will process it. The plenaries were not talks, as i remember from times past, but exercises from "Beyond Diversity 101." The exercise on race was incredibly moving for me as an intellectual understanding shifted to a more visceral, heart-opening understanding. I wept off and on with that experience fresh in my memory.

The exercise separated the people of color from the White or European-American identified folks. Jewish folks and biracial folks made different choices, some choosing a third group. I was aware that the small group i became part of was not different in race from all the small groups i had been in to that point. How different the experience would be for the group of people of color! I could imagine some of the feelings, thinking of times when i have been able to be with other women, intentionally, in male dominated communities. When time came for sharing, though, the pain, fear, anger that was shared struck me deeply. I realized my intellectual understanding had been broadened to a "heart" understanding, as the facilitator might have phrased it. 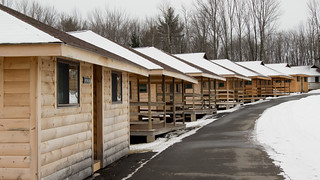 There were other things i learned as well. I felt peripheral and like i was on the edge of much of the community. Had i drawn a network diagram i would have assumed many of my connections were second hand connections through the person who had introduced me to the group years ago. I would have noted my reserve, my every-other-year attendance, and so on.

To be clear: feeling peripheral is not feeling left out or unwelcome or unaccepted. It's more feeling less engaged and connected, less involved in the story line of the community, less interconnected in relationships.

There's another feeling around being seen: i don't feel i share much. It's not that i hold back, but that i haven't been able to offer much in the way of details that could anchor me in others understanding of me. I imagine i am "that middle aged white (cis)woman from California (the California hook distinguishes me to some extent) who works in some sort of tech field with a trans spouse." "Who crochets," might be a good addendum, although it is by no means distinctive as the amount of yarn at the gathering was incredible.

After worship on Sunday, though, i realized that my feelings were not accurate. I *was* involved with some of the "story lines" of the community. While i might not feel i have shared much of myself, i clearly have shared enough that others trust me and share with me. A lovely-in-mainstream-ways woman shared with me towards the end of the gathering that she had been in conversation with others and that my name had come up (here she fanned away imaginary heat). Apparently what i think of as middle-aged drab invisibility is not -- at least to some someones out there. (Which is still really perplexing to me.)

So my brain is struggling to integrate factual observation with feelings that are in contradiction.

I was disappointed that i didn't manage to have as deep a depth of field as needed for both tree and icicles to be in focus.

I spent a little time thinking about theological diversity, and how hard it is to be inclusive of theological difference. I was remarking to DP as we drive to the airport how it seems that for folks who hold a strong theology the sense of exclusion seemed frequent. We eventually agreed, and DP said something dismissive about those people who can't decide. The words pinged around my brain for a moment like a ball in a pinball machine, but then rolled away. I felt my grounding in my understanding -- which is not particularly theological -- keep me centered as the ricochets faded, and again i wonder why folks who have expressed deep groundings in their understanding don't have that resilience. I know some of it is the constant barrage of little signals of difference they must feel all the time: i in my heretical grounding hear those signals often.

I ponder for a moment what would happen if we split the group not on race lines or class lines but theological lines. I suppose i would accept the label universalist.

A glimpse of work email this morning makes the next three work days look hard and draining.

A rattle of hail just punctuated the cold rain of today.

Christine has been sick and migraine'd while i was gone.

I've not read back in journals -- i hope folks are doing well.

This is also posted at http://elainegrey.dreamwidth.org/433236.html .
Collapse